Yesterday’s topic Why should you play Diablo Immortal expectedly not caused discussions, but only (also expected) sagril of those whom he had to sag-people who did not tolerate another point of view other than their own. For such experts Dmitry Goblin Puchkov uses a capacious, sebaceous, but very accurate term, which, I remind you, is relevant for all ages.

Well, God is a judge to them, they are so hard for them in this life. Diablo Immortal, despite the fact that it lifts the mobile gaming quality bar very high, is not an ideal product. And this is not only about technical jambs. Although I can’t talk about the mobile version of the game, since I myself play on a PC-client, which is in the beta testing stage, which is constantly and unambiguously the inscription on the loading screen of the game. I heard that on the apple tree the game shows itself excellent.

We are talking about some controversial design solutions, which, for quite objective reasons, may not like the large mass of players who decided to give a chance to the game. Which will become a possible reason for removing the client.

Why do you delete Diablo Immortal in seven days

Mandatory clarification. It is clear that the period of the week was issued an approximate, according to my internal sensations. It can vary in one direction or another, depending on the expectations of a gamer, the number of hours a day that he can devote to the game, the presence or absence of a company of comrades and a heap of other factors.

For example, many did not like the so-called Level Gate extremely. This is when, at a certain stage in the plot, the game tells you that the story will continue only when you fill a couple of levels. For example, you finished the plot segment on the conditional 35, and the next will begin only with 37 levels of development.

Yes, these levels are very, very simple, it is enough to run away several times to the portal or to finish the hour of mobs, but the very fact of such forced stops is annoying.

So, my calculation was built according to the following formula: 4-5 hours of active game in Diablo Immortal per day, with all daily quests and side tasks, solo.

The reason is the first, and the main thing. The routine quickly occurs

The plot fled the game in the mode described above is enough for 3-4 days. That is, you will complete the story, kill the belt, then you will get the last level gate, learn about the shadows, take a software (60 level) and… and that’s all. A couple of days you will run with interest to the new blue quests, deal with the tasks of shadows, enter the guild, finish the quest by 10,000 mobs with a detachment, be done to the battlefield if you like this (for the sake of daily awards. We’ll have to) and all that is so. This will take you another 3-4 days.

And so, you finally get your first (in my case, the only one!) Red helmet as a reward, and then what?

If you are a person is very diligent and like to grin a lot or strive to close all the locations by 100%, then yes, Diablo Immirtal will offer you content for a week. The maximum, by two, if you slow down and play two for a day for two days. But after that everything is already. End. You only have to farm experience to obtain a level of improvement, putting the character somewhere in the Zoltan Kula library library on the clker. Content for an ordinary player is over.

Yes, if you are full of ambitions and want to glorify yourself, then the path to the leaders of the guild. True, in order to create the guild, you need to pay platinum, and this currency is very, very slowly, although you can always pay Real Madrid or, if you are lucky, successfully bargain at the auction. In this case, you will have a lesson for a long time, unless, of course, you are responsible. But the trouble is-the remaining participants in your Tags faced the problem listed above, and the activities for guilds are a maximum of a couple per week. And now you have such a serious headache as to keep people in the game, which can no longer offer them new and interesting.

CULLEN OF THE RIGHT: violent collectivization 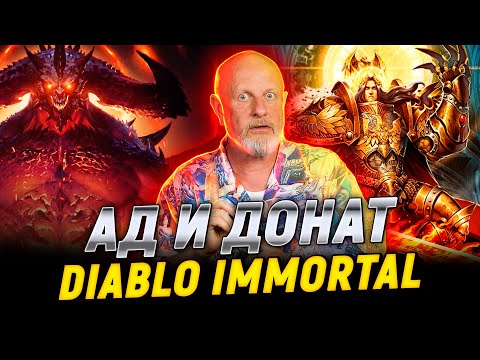 The fact that Diablo Immortal suddenly became MMO, has both a positive and negative side. I wrote about the good yesterday, today I will talk about the bad. So, in order to play DI most efficiently, you need a static. The main static is four people in the team (you plus three more). You must run together, make quests together, go to Dange too together and so on. That is, your cycles (heh-xy) must match.

But then more. You need a static for eight people! That is, two full-fledged commands that are completely synchronized in time. All is to blame the system of detachments and the buffs that it gives. In detachments, you can even transmit equipment, though not all, but only special.